The Last Will & Testament of Zelda McFigg by Betsy Robinson 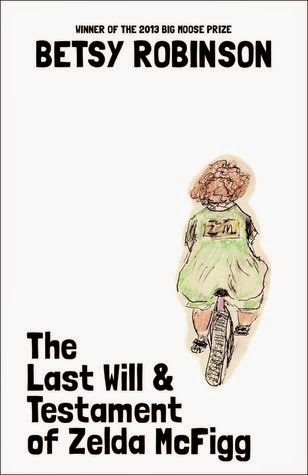 Zelda McFigg was born the antithesis of Hollywood perfection and unintentionally knew what her purpose in life would be. She would have the audacity to live her life and remind everyone, she would meet on her journey, of everything they did not want to be. In fact, she was everything the winners feared and despised. The sight of her made them stagger in resentment. In life's experiments she would become a one-woman control group.

Born to an absent father, a drunken mother, dependent on herself for survival, and a mission to become an actress, she had no moral compasses from anyone to guide her through the pitfalls of adulthood. It resulted in her making big mistakes that would ultimately catch up with her later in life. She ended up being an illegal teacher for more than thirty years as well.

The only love she understood was food. And more food. And then some more food. Until she became so obese that no one in their right social mind would want to be in her presence. At the age of 14 she knew she had to leave her mother's house. Thus began a journey of survival in which she exchanged her intellectual abilities for a roof over her head; watched ruthless people steal her horses and plow themselves all the way to successful lives; experience the shock of betrayal where she least expected it. But in the end she did not give up. She stood up for herself and wrote her memoir, just to prove a point!

"Do the right thing. It will gratify some people and astonish the rest." , - Mark Twain.

The story is a tragicomedy in which a sensitive, soft hearted young lady discovers more than the brutal truth behind the 'winnerisms', or should it be called winner mentality, and what it really entails. Despite the treatment she must endure, she remains a fighter with talent and insight to survive any challenges coming her way. It is remarkable story of a young woman who managed to survive on her own, dodge the foster care system, with no backup support and nobody to to take care of her, while she had enough compassion to assist other people to become the best people they could ever be. Her joie-de-vivre is refreshingly original.

The story is in memoir form and well-structured. The plot is slowly building up to a crescendo and a tension line is subtly snaking through the tale. The final moment of truth, in which she also must address her own problems, happened when her life slowly turned stale, like the old peanut butter sandwiches she often nicked from the school cafeteria and her patience just took a final hike.

"In July of 2009, to pick up some extra money, I had agreed to teach a two-week summer school course called The Basics of Writing.

The class was packed due to Moose Country parents’ alarm at the propensity of their instant-messaging, texting adolescents to mistake abridged, abbreviated, acronymed vocabulary and butchered syntax for acceptable writing. Sitting in the front row of my first class was Walt Edelman. How I loathed the boy.

“Miss McFugg,” he said, mispronouncing by design, “can you please tell us how many and what brand of pencils we should have for this class? My mother will only allow me one number two with a half-eaten eraser. My baby sister likes to chew.”

“Mr. Edelpuss,” I began with no idea what would ensue, “are you so dense or naïve as to think that I would believe the president of the PTA would send her progeny to this esteemed establishment of remedial education with only one half-eaten pencil? Your attempts at creative disruption are matched only by the thimble of grey matter sitting atop your neck that only a loving mother could mistake for a brain.”

For the moment of stunned silence that followed I thought I had achieved a victory.

“Miss McFuggle,” responded Edelman, his attempted cheerfulness belied by the redness expanding across his normally pasty face, “your ineptitude for teaching a remedial writing course is matched only by your delusions of literacy. Charlotte’s Web is an old fashioned movie for kindergartners!” He threw up his arms in a victory gesture and the class roared. Then, milking the moment, Edelman rose from his chair, bowed, and parodying my savior, my idol, Mr. Cronkite, he removed his eyeglasses and mimicked, “And that’s the way it is.”

As the class applauded, I felt something slip loose inside me. Some sliver of a thing that keeps one from strangling contemptible children with flaccid mouths on under-sized cantaloupe heads. I don’t know whether it was his disparagement of the work of Mr. E. B. White, or his insult to Mr. Cronkite, or my grief at my loss of the American dream, but before I knew it, I was on Edelman, pushing him into his chair, my fingers closing around his insolent, toothpick neck. I felt his heart pounding as I squeezed and twisted, and I will not lie to you—it was delicious.

And that was the last thing about the incident that I remember. The next I knew, I was lying on the A-frame table, a vestige of the pre-computer days of shop, in Principal Appleton’s office, and Mrs.Lambert was jumping and flailing like a crazed band conductor, screaming, “I think she’s dead. I never changed her mailbox tag. Oh God, she’s dead!”

Although the narrative is presented in the first person, and with often hilarious moments build into the tale, the protagonist never became narcissistic or egocentric at all. She helped other people more than she helped herself. Her inexperience made her trust the wolves in sheep's clothing, and had to learn a lesson late in her life. But she did not gave up her fight for survival. She never gave up on the American dream. It made her one of those rare winners in life who could celebrate the true spirit of real leadership and what it was suppose to be about.

The wit was often unexpected.

"Although it is commonly diagnosed as a disorder, in my opinion, lactose intolerance is only a problem if one lives in the company of others."

It took me quite a few moments to grasp the meaning of the above statement, and when it did, I rolled around laughing. Honest, in-your-face writing like this, takes a huge amount of guts from a female author. I absolutely loved her spunk to do it.

"One flew over the Cuckoo's Nest" came to mind in spending time with this remarkable, feisty, driven girl. The situation is outrageous, weird and unbelievable. Yet we all know it is possible, tragic in its truth.

"New Age gurus tell you, love does not cancel hate. Or hurt. Or resentment. Or a desire for rectification. I am living proof of that.
That boy that I sometimes miss, he also disgusts me. And even though I want no contact, I cherish the fact that we are forever connected.
Yes, I want him to hurt, but I also long for him to succeed, to be happy, to know love. I have always wanted these things—from
the day I met him to now. So you see I do know something: I know that even though I may have done it badly, even if it made me somewhat crazy, even if it was unreciprocated, mocked, and pitied, I am grateful that I took the risk.

Since being known to be a rebel myself, and always rooting for the underdog, being one myself in so many ways, I can state without any doubt, that I would have loved to have Zelda McFigg as a friend. Gold comes molded in so many forms.

I am a devoted Mark Twain fan. I imagine him in my life in those self-indulgent moments when I can feel so very sorry for myself. He would probably tell me to get over myself, I am simply not important enough, and that will jolt me back to reality in no time. In fact, he did say at one point, 'Don't go around saying the world owes you a living. The world owes you nothing. It was here first.' And if that is not the compassionate, sobering words by a friend, what is?! Hehehe.

Betsy Robinson's writing constantly has a 'Mark Twain-esque' under current flowing through it: direct, call-a-spade-a-spade honesty, that had me laughing, while I actually wanted to cry. She has a chutzpah to her that I have not found in any female author anywhere, anytime, ever. She has a new devoted admirer in me, for sure.

Zelda McFigg's survival kit contains a healthy dollop of humor which is the most important lesson she is teaching us in this book. Would I recommend her as a role model for young people? Of course not! A person who eats her problems away, seek love in mountains of fodder, makes catastrophic decisions and becomes an experienced lock-picker? Nope, it ain't gonna work, right ? But still, everyone should read this book to understand how the American dream worked for her. She was dirt poor, unattractive, unlovable, and undoubtedly obese. But she did have something else: a cheek to persist. And a gentle grace which defined everything for her.

This is everyone's story who had to take on the world single handedly and won (or lost). The narrator's voice is so authentic, it does not fit into any literary molds. But it is this individualistic cry for recognition that makes this book worth reading.

However, I will repeat what I have said in another review:

"The mother of all No-No's in my book always was, and still is, an over-indulgence in 'logue-fests'. You know, those epi-, pro- and other logue-paraphernalia, such as an additional introduction and foreword, destroying, even polluting, an otherwise promising novel." Another pet peeve of mine: adding too many reviewer comments to the introduction turns the actual book suspect. Lose it! For these reasons the book loses a star.

But overall, I loved this entertaining, insightful seriocomic fictional memoir. Absolutely recommended, for sure.